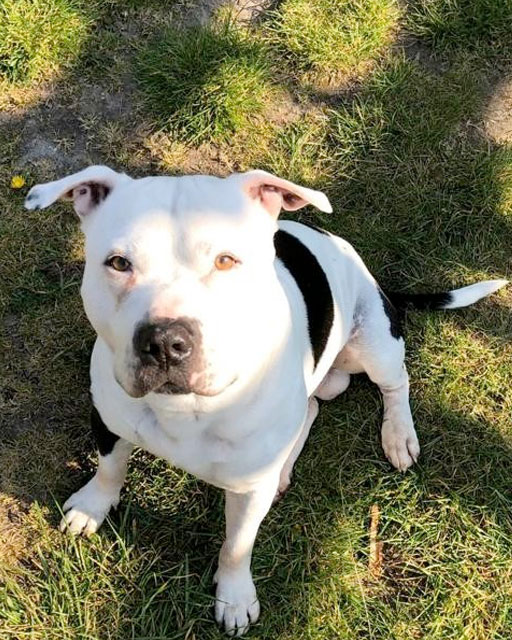 Here we have ‘Picus’, a very happy Staffordshire Bull Terrier – obviously knows exactly how to pose for a photo!

After speaking with Picus’s human parents about what service they required, Natasha was able to book a flight with American Airlines to LAX airport – a perfect size crate was provided with snuggly bedding and of course his blanket from home that smells familiar!

‘Picus’ was dropped off to us at Flypets by his family to spend the night at our boarding facilities, he was soon settled in and the final vet checks were completed that lunch time with plenty of walks in between then and bed time.

Its an early start for ‘Picus’ in the morning, but that’s ok! Our transport team are up early, allowing time for pre-flight walk on the farm before heading to the airport – just a short 20-minute drive.

It doesn’t take long for ‘Picus’ to be dropped off to American Airlines friendly pet reception staff and taken in to wait in the peace and quiet before heading over to the aircraft.

I am sure ‘Picus’ is wondering what is going on but with friendly faces and a comfy bed, I don’t think he minds to attention.

Its nearly time for take-off and ‘Picus’ is ready loaded on the aircraft – it’s a nice ambient temperature on board and his water bowl is topped up.

‘’Sorry Picus’ - no mid-flight snacks for you as we don’t want you having a upset tummy but I am sure your humans will have plenty of treats for you later.’’

Flight departed on time, clear blue skies and as soon as the flight touched down – ‘Picus’ will be quickly offloaded by the ground staff and taken to where he will be reunited with his humans!

No doubt ‘Picus’ is enjoying the belly rubs on the beautiful beaches of California and taking long Hollywood hikes!